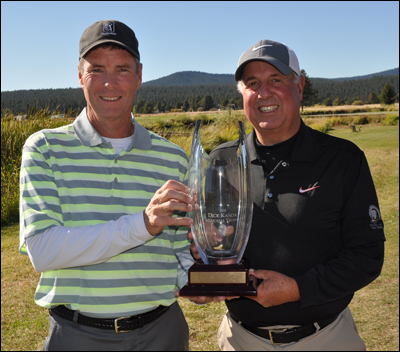 Tied for the lead going into today’s final round with the team of Don Orrell of Bend, Ore. and Jason Pigot of Redmond, Ore., Taylor and O’Donnell turned in a bogey-free scorecard, 5-under-par 66 on the resort’s par-71 Meadows Course to win the title by a single shot over Orrell and Pigot.

The two teams, playing together in the final round, were tied for the lead until Orrell and Pigot bogeyed the par-3 16th hole to fall one shot back. The teams then traded birdies on the par-5 17th hole and pars on the par-4 18th.

Tied for second with Orrell and Pigot was the team of Rob Matson of Wenatchee, Wash. and Bill Bradley of Issaquah, Wash., who played a flawless, bogey-free final round 7-under-par 64, coming up just one stroke short.

“It’s great to win a PNGA event,” Taylor said. “I’ve wanted to play in as many of these as I can, and I’m fortunate to partner-up with someone the caliber of Pat. I can provide a lot of pars and he provides a lot of birdies.”

Said O’Donnell, “We play a lot of golf together. Denny has a really great short game. We don’t get into a whole lot of trouble, and if we do I can always rely on him to put it close and give us a chance.”

In 2009, O’Donnell had been named the PNGA Senior Men’s Player of the Year, a year in which he also qualified for the U.S. Senior Amateur. Earlier this summer he won the Oregon Senior Amateur, the fourth time he has won that championship. Taylor is a member of the PNGA Board of Directors. Both men play out of Arrowhead Golf Club in Molalla, Ore., and have regularly earned a spot to represent Team OGA in the annual PNGA Cup.