The Story of Anne Quast Sander – In Her Own Words 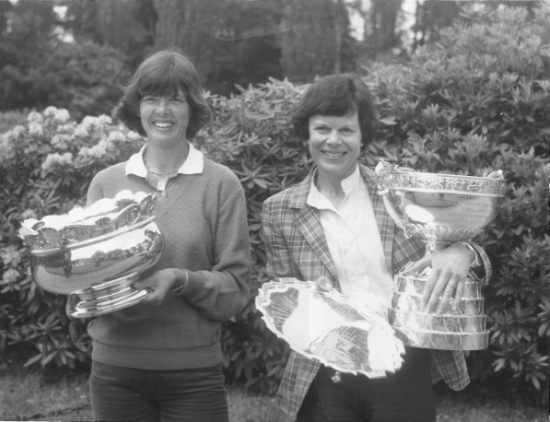 With seven USGA championships won, Sander (along with Carol Semple Thompson) ranks behind only Bobby Jones and Tiger Woods (nine), and JoAnne Gunderson Carner and Jack Nicklaus (eight) in number of victories.
Though slight of build, Sander was a dominant force on the golf course. Her 14 and 13 win over Phyllis Preuss in the 1961 U.S. Women’s Amateur at Tacoma C&GC is tied for the largest winning margin ever by a man or woman in a championship match.

So how did this Marysville, Wash., native – now 73 – who grew up at Cedarcrest Golf Course, make the cover of Sports Illustrated and help propel Northwest golf as a national force in the 1960s

Here is Part 4 of the story of Anne Quast Sander, in her own words.

My childhood dream came true in 1958 by winning the U.S. Women’s Amateur, but the “icing on the cake” followed – two more Women’s Amateur titles in 1961 and ‘63, and three times a finalist after that. I also finished solo fourth and the low amateur in the 1973 U.S. Women’s Open at the Country Club of Rochester in New York.

My first son was born in 1964, and two more sons followed later. All the years when the boys were young, I generally played in only two tournaments a year – the U.S. Women’s Amateur and the U.S. Women’s Open (one could just enter back then; there was no local pre-qualifying). (Photo: While living in Scotland in the 1970’s, Anne taught three-year-old sold Ned how to play. Photos provided by Anne Quast Sander.)

Fortuitously, I managed to play well enough to make more Curtis Cup teams and my first two World teams in 1966 and ‘68. It is so meaningful to play for one’s country! I always got a lump in my throat and a tear in my eye when the American flag was raised to “The Star-Spangled Banner.”

We lived in Scotland and England from 1974-79. I played in the British Women’s Championship each year, but never made it past the second round. From practicing and playing in the wind, I developed a serious reverse pivot!

When we moved back to the U.S., I went to Ed Oldfield in Phoenix. He said, “I don’t think you can time six inches up and six inches down anymore,” (referring to my swing). Golf writer Herbert Warren Wind, in his book “The Story of American Golf,” described my swing at age 20: “There’s a certain lift about the backswing, and a certain thump about the down.”

Ed told me that it was going to be very difficult for me to make the drastic changes. But I stuck with it, even though it was fully three months before I saw a fairway wood go airborne!

In June of 1980, I went back to England with my then 15-year-old son, David, who was later to be off to France for the first half of an exchange with a 15-year-old son of friends. The British Ladies Amateur that year was at Woodhall Spa, which Pat Ward Thomas, the great golfer writer and friend, had extolled as the best inland course on the British Isles.

I continued working with Ed Oldfield from time to time. And with the other two sons were getting older, I felt comfortable playing in a few more competitions.

In 1982, I went back to Pinehurst for the North and South, and incredibly, I won, and repeated the following year. This was a big part of my being named to the Curtis Cup after a 10-year absence. It was also most special as my sons, Ned, at the time 11, and seven-year-old Mark were there with me. After the tournament, we made a sentimental journey through England, even stopping at Woodhall Spa. They especially loved the wonderful children’s course there.

There was qualifying now, for entry into the U.S. Women’s Open, and I had one of my best rounds ever, a 69 at Portland’s Waverley Country Club, to go to the Open at Baltusrol‘s Upper Course in 1985. Ned was my 12-year-old caddie. We were interviewed on television as I was the oldest contestant with the youngest caddie. To our mutual disappointment, I failed to make the 36-hole cut.

In 1988 I returned after a 25-year absence to the Western Women’s Amateur at Evanston (Illinois) Golf Club. Ned, now 15, stayed at the old and wonderful Glenview Club where I had practiced and played when I was very young and staying at the Warner’s. Ed Oldfield was the pro at Glenview, so every afternoon he would watch me for a few minutes.

I’m sure that’s why I won. And what joy to share it with my son! That helped me earn a spot on the World Team in Stockholm in 1988, which we won by a single stroke over the Swedes.

I was also thrilled to be on the Curtis Cup team again in 1990. Vicki Goetz, the then U.S. Women’s Amateur champion, and I were foursomes partners (i.e., alternate shot). Vicki was 21 and I was 51. Such fun! And we won both matches.

I had won the first of four USGA Senior Women’s Amateurs the year before (they were all then three rounds of medal play.)

In sum, I knew such success and joy at golf long after the fulfillment of my initial dream in 1958. I have kept competing in a limited way, but with generally disappointing results.

Perhaps I should follow the dictum of the Chinese philosopher Lao Tzu: “When your cup is full, stop pouring.”

Jeff Shelley is the editorial director of Cybergolf.com and has authored three editions of the book, “Golf Courses of the Pacific Northwest.”